I’ve been getting some great feedback in response to my scrap room photo and video tour and thought I’d answer a few inquires in one post.

Q.  How did you put together the long workspace along your wall on top of the Jetmax cubes?

A.  It was so easy and fairly inexpensive as well.  I went to Ikea and bought three Vika Amon table tops for $19.99 each.  They come in several different colors but I chose black/brown.

Then I laid them out on top of my jetmax Cubes with one set of two cubes at each end/intersection of the table tops.  Then I placed a bracket connecting the two table tops to one another as shown in the photo below.

Last, I placed L brackets along the back wall and table tops to secure them to the wall, (making sure to leave enough space to fit a power cord in between the table top and the wall!).

As you can see, the Jetmax cubes are not attached to the table tops in anyway, the table tops are simply resting on top of the cubes so I can still move them around as needed.  That’s how I put the workspace together 🙂

Q.  How did you set up your camera so that you can film your videos looking down onto your workspace?

A.  This was really easy and VERY inexpensive as well!  I purchased a flagpole bracket at my local Goodwill for a couple of dollars.  (You can get them at any hardware store) and they look like this:

I simply mounted it to the underside of my shelf as seen in this picture:

Then I purchased a wooden dowel for another couple of dollars from my hardware store (Lowes/Home Depot) and made sure it was the right size (I believe it was 1 1/2 inches but I’m not positive).  I simply slide it into the flag pole bracket when I want to film and I can take it out and put it away anytime I don’t want it showing.

My video camera is attached to the end of the dowel/pole using a gorrila pod.  It looks like this and I got it from Walmart. 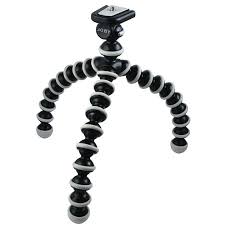 The fingers of the gorillapod wrap around the dowel perfectly and my camera just twists onto the end.  The only problem I had is that the weight of my camera (which is tiny) made the gorillapod slide and my camera kept moving so I ended up using good ole’ duct tape to tape it to the pole.  It’s not pretty but it works and doesn’t slide anymore!

Q.  How did you put together the island scrapbooking desk and how much did it cost?

A.  I did a separate post for this a few days ago and you can read it here.  (link will open in a new window).  The desk only cost me $42.00 total and was fun and easy to put together!

Q.  Where did you get that storage unit with all the grey bins?

A.  I got it from Costco a couple of years ago.  However, my Costco no longer sells it.  Keep an eye out for things that are made for use in storage rooms, garages, etc., that can be converted into pieces for your craft/scrap rooms!  This thing is not very pretty but it sure holds a LOT of stuff!

Q.  Where did you get the ink pad holders for your distress inks?

A.  They are called Mediastix and I got them here from Target.com.  They are $12.99 currently.

A.  I made it!  I took a cardboard box and cut off one flap.  Then I held the other three flaps up and duct taped the together so that they were standing up and put a piece of scrap paper inside and voila!  A 12 x 12 spray box that cost me….ready?  NOTHING!

Q.  What kind of shelves did you use in your room?

Q.  Where did you get the larger button jars?

A.  Another find from Ikea.  They are called Burken jars and they are $2.99 each for the 17 oz size which is the size I use.  You can get them here.

I think I covered all of the questions I’ve gotten so far.  If there is something you want to know, just email me or leave a comment and I’ll be happy to answer it.  Thanks for stopping by and visiting me!

This site uses Akismet to reduce spam. Learn how your comment data is processed.

Copy and paste this code to add my button to your blog or website!