So I’ve been driving myself crazy trying to figure out how to store my copic markers and I’ve probably been taking you along for the ride with all of my posts sharing my different ideas (lol).  I’ve tried or considered these options: 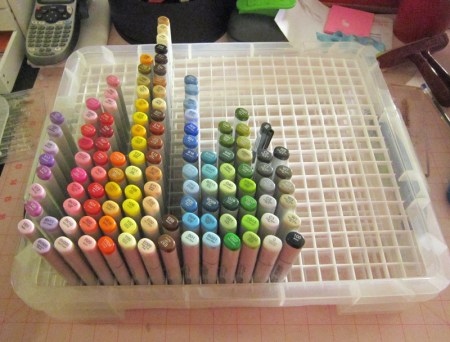 This would have worked had I had more space (and more markers) but I didn’t so I scrapped this idea…. 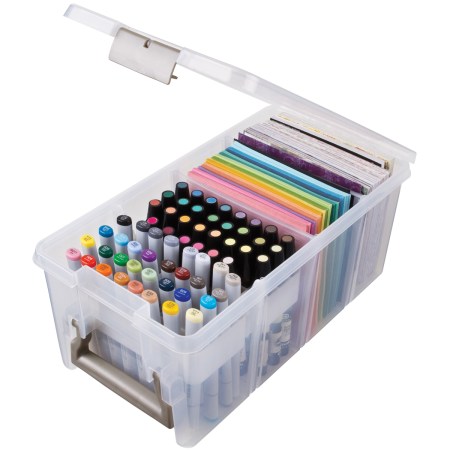 This ArtBin Marker Storage Satchel would have worked perfectly had I had LESS markers.  (I put an extra insert in it and it held up to 128 markers but I have more than that).

I also tried a metal utensil holder from Michael’s which worked for a long time until I outgrew it (sorry I don’t have a picture).

These are the solutions I considered but decided against because they weren’t portable:

These are both great options but I wanted to be able to take my markers to another room or another location whenever I wanted to.

So what did I end up choosing in the end?  Something that I had in my house all along, sitting in a closet collecting dust…..my old cropping tote bag!  Thanks to my good friend JoBoogie for the idea!!  I was going to sell the tote because I wasn’t using it and she suggested that I use it for my copics so I took some pieces of cardboard and cut it up to make dividers and voila! An instant copic marker storage bag.  Best of all, the middle section holds my copic marker books and X-press It Copic Blending Paper!  There’s even a spot for my swatch book!  The little pockets on the outside are still empty so if I needed to put stuff in there I still can!  How ingenious was this and why didn’t I think of it earlier? lol

Here is a picture of it all filled up and ready to go!  (I’ll take a better photo later, I took this with my phone just to show you real quick).

How do you store your copics?

This site uses Akismet to reduce spam. Learn how your comment data is processed.

Copy and paste this code to add my button to your blog or website!